What an amazing ending! Jef is definitely a good match for Emily.

My only regret sitting there watching it all was that she didn’t give Arie a chance with Rickie. He had already had experience being with a single mom. What if he had been just as good with her, if not better?

But maybe what swayed Emily in the end was that she and Arie didn’t have as many honest, heart-to-heart talks that she and Jef had shared. With Arie, it was definitely attraction and passion, and yes, he’s such a good guy, but it was the depth of what they had that caused her to choose Jef instead. Arie definitely showed her physically that he loved her, but did he show her intellectually? In some ways he did “come out” and it was so great when he did. I just wanted him to keep talking; there was so much value in his words, so intriguing what his next ones might be. But instead he kept kissing her. Next time Arie, for whatever it’s worth, let a woman “hear” who you really are. You’ll win her heart for sure.

Lots of old books, college textbooks, and even movies!!!

I know why Emily picked Arie & Jef and let Sean go. When they were on dates with her, all three of them, only Arie and Jef wanted to know such detailed, REAL information like who would live where, what would their life be like, etc. It showed me and I guess Emily that the feelings they have developed for her are real, and they are thinking ahead realistically. Unfortunately for Sean, he didn’t ask anything like that. He did, however, offer a very sweet bit of writing about Rickie. Sorry to see Sean go but I think Emily is choosing the right person, unlike the last Bachelor, when what’s his name picked Courtney! Wow.

Well, I could have seen that coming. I know Chris seemed sweet and probably is a good man, but under that kind of pressure, I think it got to him. Accusing sweet Doug of antagonizing him? It didn’t even happen. Chris seemed way too sensitive about everything, which to mean screams immaturity. He’ll grow out of it and be an amazing catch, but isn’t quite there yet. I saw someone who maybe wouldn’t be able to handle much chaos, and with kids comes that, even if it’s the good kind. And yes, there is a good kind of chaos. Where all four kids are singing a different song at once, or playing sock wars with bundled socks flying everywhere, or laughing over a Chris Farley scene…we miss you, Chris.

What I saw  in The Bachelorette Chris is that he kept saying he was the best man for Emily in that group. Anyone who says they are the best is only trying to convince themselves. It’s like playing Facebook’s game, Farkle, with a guy from Aussie who’s married, who says he has a great relationship with his wife, who flirts incessantly with me no matter how many times I tell him to stop, who doesn’t tell his wife he’s talking to more than one woman online…and he says he’s a “nice guy.” I put up with him for a few weeks, then cut off communication. He’s not a nice guy, and what I told him is his wife and I both deserve better.

Who do I predict Emily will end up with? Sean. He’s not my first choice, though. He might be a great guy but I haven’t once seen him act like a kid, really let himself go. He seems like he’d be very controlling, but I’m sure loving, and a great provider and protector. And Jef is a great guy, but does she not see that he’s probably Morman, and that’s not a bad thing, but definitely something she needs to know if she’s not Mormon? And yes, he’s so fun to be with, he’s so expressive and honest, you can’t help but love the guy. But Arie, he’s the guy for her. In that race car suit? Wow! Come on! And he is silly, goofy, honest, loving. It stinks that I think he’ll be the one rejected in the end.

I know I’m a bit behind, but Doug? Noooo. He is so sweet. A little slow but man, he must have been hurt by some awful woman. And John, well I guess I could see that one coming. He just held back so much, but as the great Paul Rudd says in Forty Year Old Virgin, “that’s [his] journey.”

And as I warned you, I do have a bit of a meltdown when I talk about the abuse, so that’s why I haven’t been posting much lately. I’ll get back.

Hands down, Ryan is gorgeous, funny, charming, endearing. On the flip side, what he wants in a woman is much like a robot: not too emotional, logical, servant, etc. Some of the attributes on his list are good of course, like faithful, but as Emily says, there is nothing on his list about love. Kind of sad. And when he leaves her after not getting the rose, the one thing he really focuses on is how he looks, how his personality is portrayed, on camera. Not one tear. Because he knows getting women is not difficult for him. And I think he assumes that he will be the next Bachelor.

As for Travis, your heart just breaks. Look at the difference between Travis leaving, Alejandro leaving, and Ryan. Profound difference. And I just wanted to yell at my television, “Yes Travis, you will find someone!” But of course that would have been pathetic, so I didn’t yell it. I just thought it. It’s a toss up for me between Alejandro and Travis for the new Bachelor. Or that sweet man, sorry I can’t remember his name, with the disability. As I said before, this group of guys, especially the ones left now, have huge hearts, and real emotion, like Doug did on Monday. It made my heart hurt. They all deserve someone amazing, and what they don’t know is that they will probably get more offers of love than they can handle. I just hope they find someone perfect for each of them.

Anyway, just my thoughts, and I already know I am too committed to watching other people fall in love instead of finding my own. I just don’t know what that feels like, so I stay away from it rather than walking toward it. I didn’t know that PTSD was why I never could connect to anyone. Why I couldn’t stay. Or love very deeply. So I live vicariously through all the romance movies and novels and reality shows, and that’s how I feel anything at all.

I know this isn’t really literary, but I had to say something about what’s going on with the show. lol

First of all, I think Emily seems very sweet. As for the guys, wow, what a great group of people they are. Now I would have kicked Kalen out when he shushed me the first time, and I would have kicked Ryan out for his weirdness in the beginning, but I would have been wrong about Ryan. He is so gorgeous and so neat. Yeah yeah I know. I must have better things to do with my time than talk about the lives of these people, but I get into it, I don’t have a guy, and that’s all I’ve got to say on that matter.

I have really been impressed with the guys. I know I’ve said that, but they all seem so sincere. So good.

As for Emily getting upset with the guys this last week because no one told her what Kalen had said about her daughter, I’d have to disagree with how she handled it.

What I saw was all those guys being very concerned, angry, and protective of Emily and Ricki. I didn’t see what Emily saw…no one having her back. And I also didn’t get how she felt so disrespected, how she said no one told her, when Doug was the one who, as soon as he heard about it, sat her down and was honest with her. Wow, way to go, Doug. He really showed his greatness there. I don’t think any of them deserved the anger that Emily showed toward them. It’s not like they all let her shuffle along, and even pick Kalen in the end, and THEN tell her.

Anyway, if I were a bit younger, and really skinny (I can and do plan to fix the skinny part; can’t do much about the age part), I’d say “hey ya’ll” to any of those guys, because they are the best group I’ve seen on there. And don’t even get me started on how I drooled over them wearing Romeo…and even the Nurse…costumes. Wow. It just seems like there’s a group of guys that have integrity, honesty, compassion, and good looks.

And I’m sorry that Alejandro was kicked off because he was a sweetheart. Maybe he should be the next Bachelor???

That’s all for now. 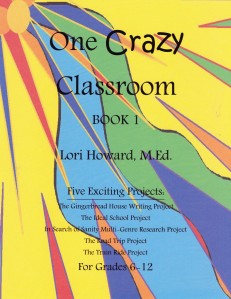 Check it out at amazon.com! There are 5 really creative projects for 6-12 graders! Works great for home-schooled kids, too!

is not full of students

waiting to learn one thing

a classroom is full of people

i want to know

and things i don’t

and times I want to take a walk

i want to dance

i want to sleep

i want to curl up in a ball

and i want to fight

i have something to say

i have so much i feel

i have a life

i have different tastes

i feel represent me

my hair is a statement

only what i allow

Let me start by saying I really wanted to be an architect when I was younger. And it wasn’t Craig in the story who designed the spaceship house: it was me. And the design of the house rebuilt is also mine. I would love a house with a Bridge to Nowhere, secret passageways, and train tracks running through it. I also designed that house for wheelchairs, to include going through the pool, but again, I was very young at the time. It’s the thought that counts, right?

As for the tarot card reading scene, that was real. No one was with me at the time, as my children live in different houses in different cities, but I thought of each of them, to include the characters of Craig and Jason, and did an actual tarot card reading. It was dead on for my kids and myself, and I believe dead on the Craig and Jason’s characters.